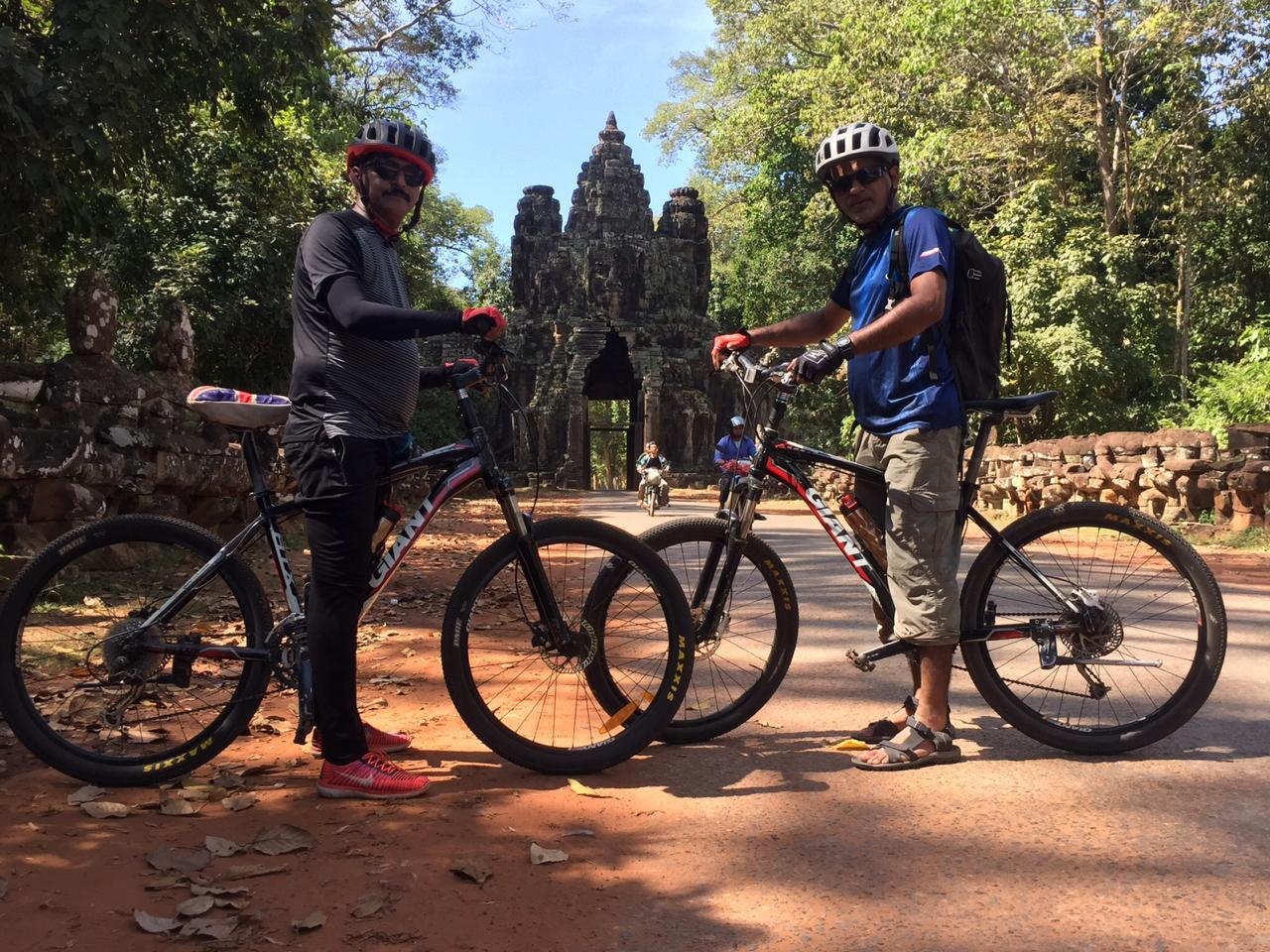 This tour takes in two of Southeast Asia’s most diverse and fascinating countries, namely Vietnam & Cambodia. From Saigon we head into the Mekong Delta, riding quiet back roads over canals. Our entry into Cambodia is by boat as we head up one of Asia’s great rivers, the Mekong, to Phnom Penh. Cycle on to Kampong Thom to visit temples before we head to Siem Reap and more famous temples of Angkor.

HIGHLIGHTS OF THE TRIP:

COST FOR THE TRIP IN USD 1892 / –
All payments in INR would be charged on the current USD rate at the time of actual payment.

If you’re flying into Ho Chi Minh City today you will be met at the airport and transferred to the group hotel. The remainder of the day is at leisure to start exploring, with a group meeting being held in the hotel foyer at a time indicated in your final documents. Tonight we enjoy a welcome dinner at a local restaurant, allowing us to sample Southern Vietnamese specialities and meet our fellow travellers. Overnight in Ho Chi Minh City.
2

We set off in the morning on a day of sightseeing, taking a short bus trip to Hoc Mon town where we’ll hop on our bikes and cycle through scenic rice paddies and rubber plantations making our way to the famous Cu Chi Tunnels, a twisting network of narrow underground tunnels and rooms that the Viet Cong used as its military base and living quarters during the Vietnam War. We’ll learn about the Viet Cong’s life underground as well as being able to explore the network of tunnels by foot. After lunch at a local restaurant we’ll then drive back to Ho Chi Minh City (formerly Saigon) for the afternoon, taking in some of the city’s most important sights. We begin with the Reunification Palace, an outstanding example of 1960s architecture that is steeped in modern history. It was here that the Vietnam War ended in 1975, when the city of Saigon fell after a North Vietnamese army tank crashed through the palace gates, from which point the city was to be known as Ho Chi Minh City. From here we visit some of the city’s major landmarks: the Notre Dame Cathedral, an imposing neo-Romanesque Catholic cathedral built in the late 19th century; and the Saigon Post Office, a classic French colonial building bearing a giant portrait of ‘Uncle Ho’ and many grand architectural details. To finish the day, you might like to visit the famous Ben Thanh Market, an enormous sprawling covered marketplace that is packed to the gills with everything from fresh fruits, vegetables, seafood and sweets, to suitcases, clothing and white goods, traditional lacquer ware, handicrafts and kitschy tourist trinkets. Bargaining is key here, but even if you’re not shopping, it’s a dazzling spectacle to photograph. Tonight we’ll enjoy dinner at renowned social enterprise restaurant, KOTO. Founded by Vietnamese-Australian Jimmy Pham, KOTO (‘Know One, Teach One’) is a popular restaurant that provides hospitality training and welfare services to disadvantaged young Vietnamese, getting them off the streets and equipping them with life-changing skills and opportunities. Overnight in Ho Chi Minh City.
3

Today we depart Ho Chi Minh City and cycle towards the lush waterways and farmland of the Mekong River Delta. One of the world’s great rivers, the mighty Mekong, Southeast Asia’s longest river, rises in China’s Tibetan Plateau and ribbons all the way down through Southeast Asia, emptying into the South China Sea south of Ho Chi Minh City. The vast alluvial plains of the Mekong Delta are the fertile food bowl of Southeast Asia, providing critical water for fishing, agriculture and transportation. We leave the busy streets of Saigon and drive to My Tho town, where we’ll hop on our bikes and cycle for around 40 km to our lunch stop in Vinh Long. From here we continue our cycle through small villages and farmland to Can Tho, the Mekong Delta’s largest city. Overnight in Can Tho.
4

This morning we set off early for a pleasant ride along the riverside and through villages to the Cai Rang floating market, where we’ll visit a well known bamboo basket-weaving village and explore the exciting floating market in a traditional sampan rowboat. After stopping for lunch at a local restaurant we’ll continue cycling towards Long Xuyen and Rach Gia, our home for the night. Overnight in Rach Gia.
5

After breakfast we travel to Ha Tien and cross the border into Cambodia, where our Cambodian guide will meet us. From here we’ll cycle to the charming beach town of Kep on the Gulf of Thailand coast. Once a popular French colonial resort town, Kep is known for its fresh seafood, crumbling French colonial villas and relaxing lazy pace. Tonight we’ll enjoy some of Kep’s famous seafood with dinner at a local restaurant. Overnight in Kep
6

Today we take a gentle ride towards the relaxed riverside town of Kampot, where we’ll cycle around and visit some of the town’s sights. Like Kep, charming Kampot is also home to handsome French colonial villas and a relaxing pace that makes it a favourite hang out with travelers. Today we’ll also have the option of renting kayaks and paddling around the beautiful Kampot River. Cycling distance: 50 km Overnight in Kampot.
7

Today we set off on our bikes towards nearby Bokor National Park, where we’ll ride to foot of the hill and then drive in our support vehicle to the top of the mountain, for great views over Kampot and the Gulf of Thailand. We’ll ride back to Kampot for lunch and then continue on our bikes to Cambodia’s capital, Phnom Penh. We’ll ride most of the way before taking the support vehicle for the last 70 km or so, arriving at our hotel in the afternoon. With its handsome architecture and location at the convergence of the Mekong, Bassac and Tonle Sap rivers, Phnom Penh is regarded by many as the most beautiful of all the French-built cities in Indochina. The city has a growing fine dining and hip caf culture, excellent museums and a booming arts scene, and Khmer and French influences are evident throughout the city’s ornate temples and grand colonial buildings but its busy streets overflow with markets, motorbikes and fragrant food stalls as per most Southeast Asian cities. Overnight in Phnom Penh.
8

Today we hop on our bikes and head off to see some of the city’s major attractions, including the 19th century Royal Palace and adjoining Silver Pagoda, the National Museum, and the Killing Fields of Choeung Ek, a sobering reminder of Cambodia’s more recent and bloody past. If time permits, we’ll also cycle to the Toul Tom Pong Market (Russian Market), a sprawling marketplace filled with textiles, antiques, artworks, carvings and souvenirs. We’ll freshen up at our hotel before heading out to dinner at a local restaurant. Overnight in Phnom Penh.
9

Today is a rest day from cycling as we take a private bus to Siem Reap. We drive through picturesque countryside, stopping along the way to walk through local villages. After stopping for lunch in Kompong Thom we’ll visit Sambor Prei Kuk, an impressive collection of 7th century temple ruins that served as the capital of the pre-Angkorian Chenla Kingdom. The remainder of the afternoon is then free to explore Siem Reap at leisure. Overnight in Siem Reap.
10

If you’re happy to rise early today, we’ll have the option of driving to Angkor Wat for an unforgettable sunrise. After breakfast back at our hotel we’ll hop on our bikes and spend a full day exploring the spectacular Angkor temples. The UNESCO World Heritage Listed site of Angkor Wat, one of the great wonders of the world, encompasses not just the one temple but an expansive religious city covering several square miles near Siem Reap, the largest religious complex in the world, including scores of temples, shrines, canals and other structures. This is one of the world’s most significant archaeological sites, and is at once an arresting and unforgettable experience to see the temples in person. With the majority of construction taking place between the 6th and 13th centuries, the temples of Angkor together form an incredible testimony to the spiritual vision and artistic genius of the Angkor civilisation that flourished and prospered from about 800 to 1400 AD. Many of the temples are still in excellent condition especially the iconic Angkor Wat but many structures are in states of ruin as the surrounding forests have taken over during the centuries since their abandonment. The iconic temples are intricately carved and adorned with sculpture and bas-relief depicting sacred scenes of Cambodian life and mythology. Today we’ll visit the South Gate of Angkor Thom Temple, the Bayon, the Royal Enclosure, Phimeanakas, the Terrace of Elephants and Terrace of Leper Kings, the Ta Prohm Temple and the iconic Angkor Wat. Overnight in Siem Reap.
11

Today we have another day exploring the majestic Angkor temples at handlebar level. First up we’ll visit the Banteay Srei temple, smaller than others in the Angkor region but considered a jewel of Khmer art for its unique beauty, the quality of its restoration and the intricacy of its pinky-red sandstone carvings. After lunch at a local restaurant we’ll head to the Roluos group of temples just out of Siem Reap, some of the earliest Khmer structures that are believed to signal the beginning of the classical period of Khmer architecture. On our way back to Siem Reap we visit the ruins of Pre Rup, the state temple of Rajendravarman II, king of the Angkorian Khmer Empire; the Mebon temple; Neak Pean; and Preah Khan. Tonight back in Siem Reap we’ll enjoy our final dinner together, along with a performance of Cambodia’s elegant royal court dance, the Traditional Apsara Dance Show. Overnight in Siem Reap.
12

This morning we’ll visit Kampong Phluk, an intriguing stilt-house village floating on the floodplains of the Tonle Sap Lake, among flooded mangrove forests that we’ll explore by small boat. After lunch, our journey concludes in Siem Reap. If you are flying home today you will be transferred to the airport in time for your departure.

* All payments in INR would be charged on the current USD rate at the time of actual payment. COST IN USD = $1892

*Any increase in park fees , taxes etc at the time of booking will be applicable. 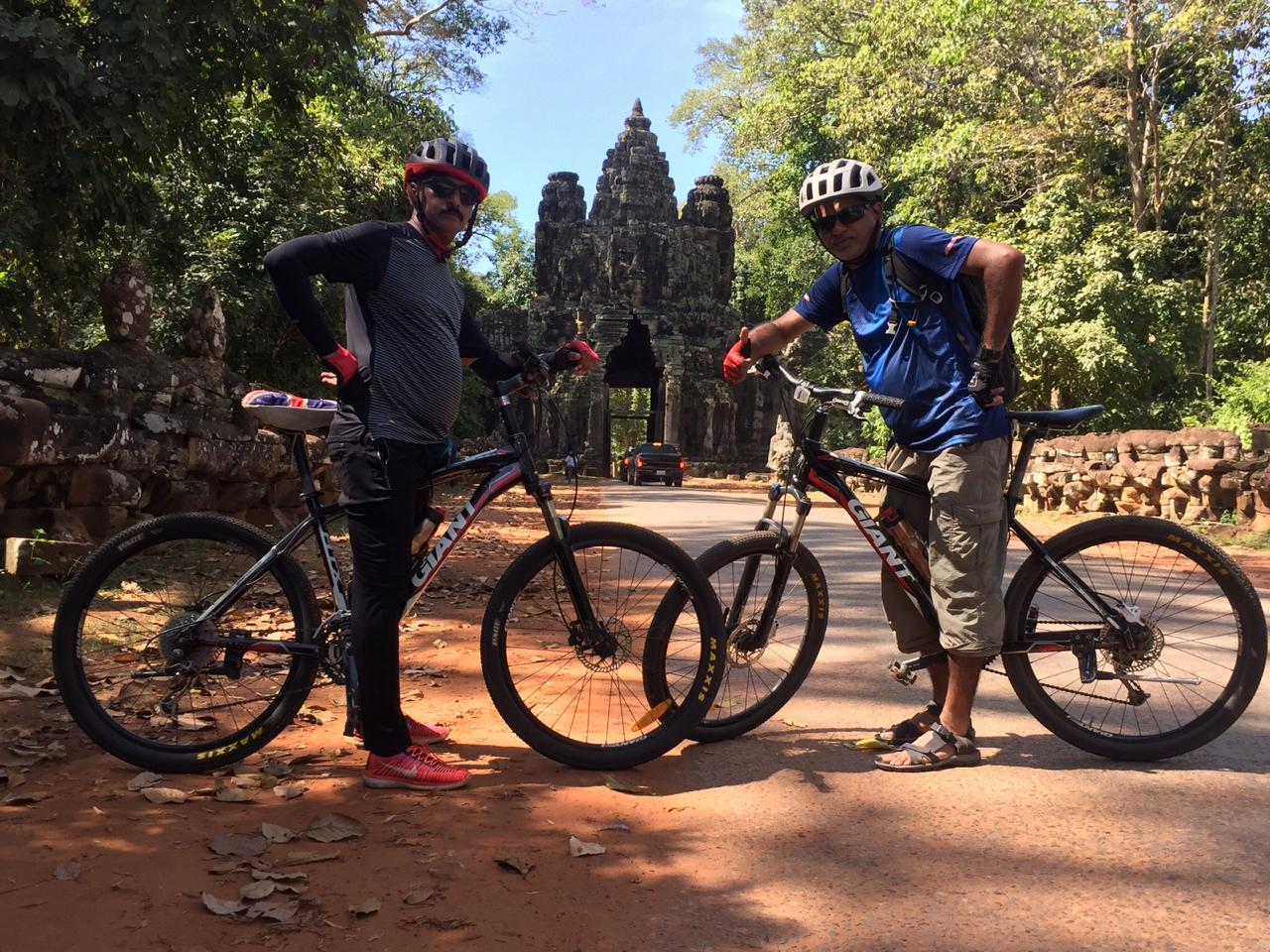 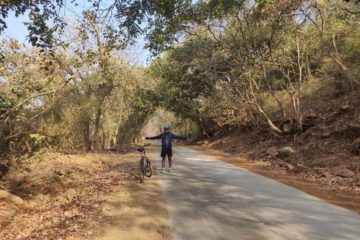 One day Cycling trip in Mumbai 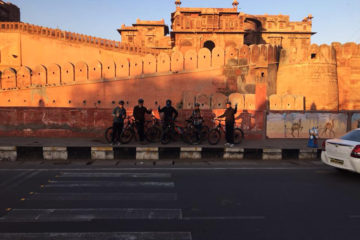 A 6-day cycling tour from Bikaner to
6 days
Rajasthan 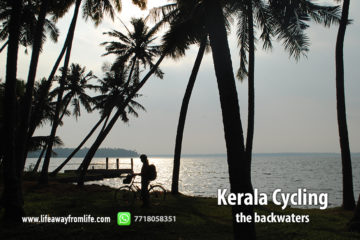